This should be an article about deconvolving an actual recorded reverberated sound to produce the impulse of a reverb, but we do not have all the needed tools to do so yet. To get there, we will prepare several articles. Once we are ready – and if we succeed – we should have a reasonably good imitation of the actual reverb and should be able to use the resulting impulse to simulate the actual reverb on any recorded sound.

In any space, we can record a short sound – clap, drum hit, gunshot – together with the actual reverberations of the space. If we can identify the original sound by, say, recording it separately with a microphone that picks up little or none of the reverberation, then we should be able to determine the number and distribution of signal repetitions in the reverberated part. Then, we will have a model of the actual reverb. If the reverb is nice, we will have a way to simulate the nice reverb on other recordings.

To test this theory, we will first create the impulse of an example reverb. This reverb does not have to be great or even realistic. It should be something we can use to, first, create a reverberated sound, and, second, use the reverberated sound to try to recreate the impulse. We will use two things. A tapped delay line will model the early reverb reflections – a small number of repetitions that are somewhat far apart. A Shroeder reverb will model the late part of the reverb – a large number of repetitions that are close together, perhaps with some peaks in the series of repetitions.

The tapped delay line is usually written as 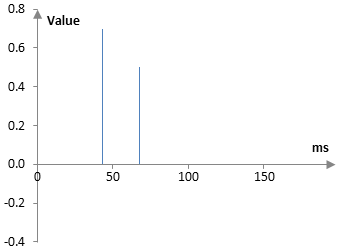 where M is the amount of delay in samples and g is the gain. They create many decaying repetitions of the signal. The comb filters are simply

where, again, M is the amount of delay in samples and g is the gain. These comb filters create peaks in the repetitions of the late reverb. We will see these below. We will make a simple late reverb – one with only two all pass filters and only one comb filter.

First, we have to figure out what exactly we should put through the Shroeder reverb – the original signal or the output of the tapped delay line. We can do either, but running the original signal creates an output that is easier to understand and fine tune. The parameters chosen for the tapped delay line above or the all pass and comb filters below are not random. We will use what we see to fine tune them, but more on that later. 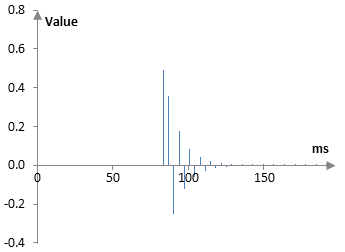 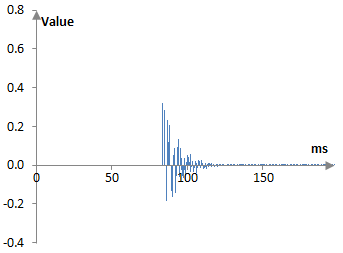 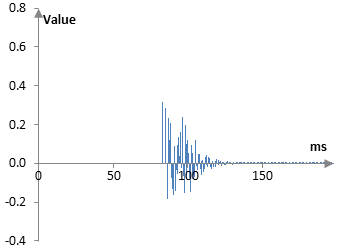 Finally, the total reverb impulse response would simply be the sum of the output of the tapped delay line and the Shroeder reverb (original signal still omitted; we can add it at any time). 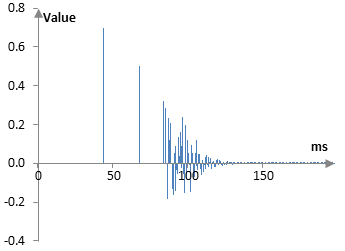 This is the impulse response of the total reverb. In the next article, we will run a fake drum hit through the same set of filters as well as through a convolution with this impulse response to check if the reverberated drum hit matches.