Orthogonal functions and the Fourier series

Sine and cosine functions of different frequencies are orthogonal for carefully chosen intervals and frequencies. If m and n are two different integer frequencies, then

are also orthogonal, this time over the interval from 0 to T. If T = 1 and the signal x(t) happens to consist only of integer frequencies fn, then we can say that the signal x(t) is the sum of orthogonal functions.

The simple waves in x(t) are orthogonal over the interval from 0 to 1, of course, only if x(t) consists of simple waves with integer frequencies.

This is an important result. If x(t) does in fact consist of integer frequencies, then its simple waves are orthogonal in the interval from 0 to 1, and we can compute the magnitudes of the coefficients Bn and Cn.

for some amplitude An and phase τn, then

Thus, if a signal over a properly chosen interval consists of simple waves with integer frequencies, then we can compute the amplitude and phase of each simple frequency in the signal.

In the discrete time case, the above integrals can be approximated as the sum of the sampled function values at, say, N points, multiplied by the sampling interval (1 / N).

The amplitude and phase computations continue to apply.

In 1807 Joseph Fourier shows that any periodic function f(x) with a period of 2π that is integrable over [-π, π] can be approximated with a (potentially infinite) linear sum of sine and cosine waves as follows.

The coefficients Bn and Cn are computed with the integrals

Shifting by π and replacing x with x = 2π t, we can obtain a similar result, namely that a continuous signal x(t) can be approximated with a sum of sine and cosine functions of 2π t over the interval from 0 to 1. We can also produce a similar result in the discrete case.

Take a complex signal that is the sum of the simple waves at 10 Hz, 25 Hz, and 50 Hz with amplitude of 1, 0.8 and 0.9 respectively. Suppose that we have the values of the signal sampled with some sampling frequency fs, and nothing else. If we compute the amplitude of various frequencies in the frequency spectrum in this signal using the formulae above over the interval from zero to 1 (from sample 0 to the sampling frequency, thus setting N = fs in these equations), we will obtain the graph in the figure below. 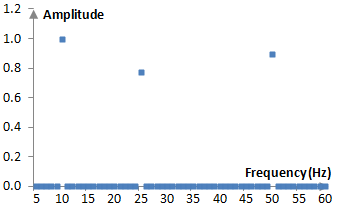 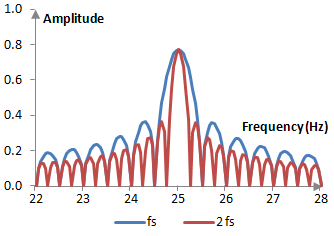 This is so because a simple cosine wave has a Fourier series expansion that is itself and Bn = 1. The result is the same for a simple sine wave.