10 years ago, I played with Samplitude – a powerful recording and mixing software. I liked it, because it was intuitive. Learning how to use it took little time.

Samplitude is still out there. It is produced by MAGIX. The latest version is MAGIX Samplitude Music Studio 2016. I checked it out, but I was not paying much attention. I ended up downloading the trial version for MAGIX Music Studio 2016, which looks like a light edition version of Samplitude. It sells for $49.99 (as opposed to $99.99 for Samplitude), has less virtual instruments, does not support higher bit resolution and sampling rates, does not support VST3, etc.

I suppose at some point I will want to play with Samplitude itself. MAGIX Music Studio 2016 itself, however, is very impressive.

I installed the trial version on Windows 10, with no problems. It is a large installation – over 250 Mb, not counting the 180 Mb demo project. A couple of strange things:

This second point above is an issue for me. I would have spent a lot more time with the software, had I had the 30 days. For 7 days, this will simply be an overview.

The software does not look much like what I remember from 10 years ago, but that does not matter. The graphics are good, the software remains intuitive, and there are no bugs (even the knobs work). It took me only seconds to find the track editor and mixer and only a bit more to understand the complex track routing and effect selection.

Of course, I can find things to complain about, but these are minor. For example, a lot of controls are missing tooltips, which made figuring out what they are supposed to do slower (the Help seems robust though). Playback continues forever, long after the last wave in the session is finished. Again, these things are minor. They should not detract from the fact that this is a great piece of software.

MAGIX Music Studio 2016 is designed around four main windows: 1) the track editor; 2) the mixer; 3) a record window; and 4) a mastering window. 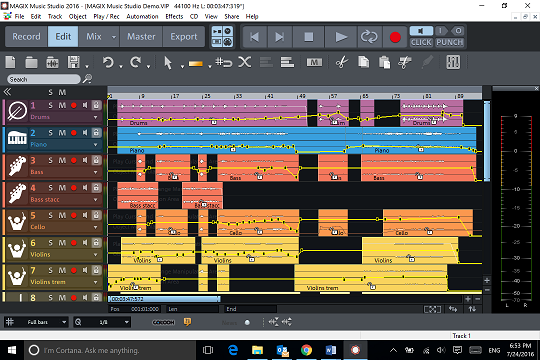 This window is everything one should expect. Recording, inserting, and moving waves around are easy. There are envelopes. The window makes great use of space and user controls. For example, the same mouse pointer in the top of the wave is for selecting waves, in the bottom for moving waves, and in the very bottom for something that looks like shrinking waves. A number of items (e.g., track controls, the file manager) are actually hidden, but easily accessible to the left of the track control panels. In some sense, there is actually too much, but I suppose no one has to learn every single way of getting to a particular control.

The first time around, I could not play the demo project. The software said my output device is in use. This is strange, as my output devices should act as mixers – they can take more than one signal. The second time around and afterwards, everything worked as expected.

There were other issues as well, but minor. The little speaker-looking icon next to the recording button in each track does not seem to be doing anything. Judging from the mixer window, this is just to show the amplitude peak meter. 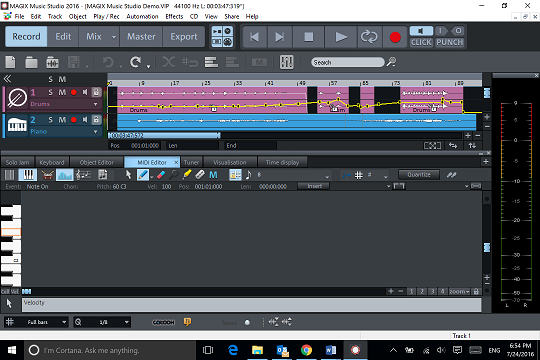 Recording itself in the track editor works well (of sampled audio files; I did not actually test recording of MIDI – it seems supported). Initially, I could not select an input device in the Easy Set Up window, but I can now see the input device in the mixer window.

I had a problem figuring out the recording window itself (at the bottom of the picture above). It is actually a MIDI editor. It took me some time to realize that I needed an existing MIDI file. I am still not sure how to start a new one. It must be there. The MIDI editor itself seems very powerful, if you have the time to play with it. 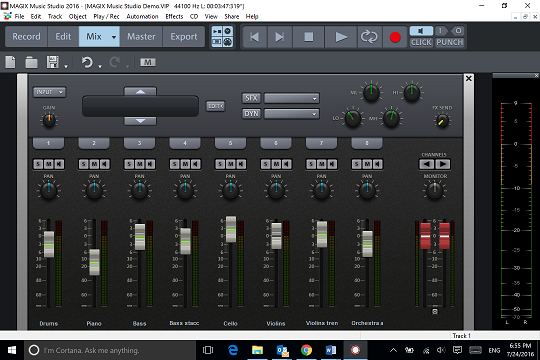 Again, everything is here. Each track has a volume, equalizer, complex track routing that took some time to understand, a number of effects, including compressors, stereo enhancers (i.e., pan, phase inversion), reverb, delay, equalizers, distortion, chorus, etc. etc. There are individual track controls and master controls.

The mixer window itself did not fit on my screen. I am working on a high resolution (HDPI) screen and using the automatic Windows 10 scaling, which does not work well, but that is a Windows problem. Right now, I see no way of getting around that, but I suppose this will get fixed as Windows (and software applications) improve.

I tested the reverb and equalizers. I always test the reverb, as it is the most difficult effect to design correctly. This one is quite impressive and seems very well tuned. I still cannot figure out how to change the order, in which effects are processed. 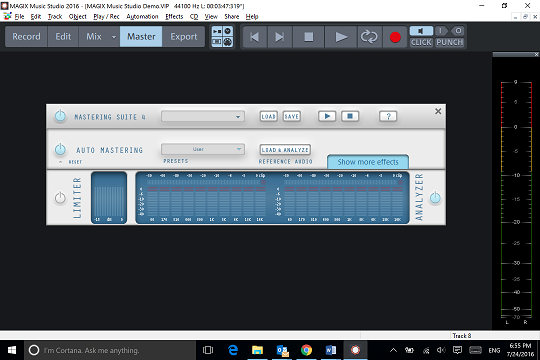 The master window actually pops up with a number of meters: a vectorscope, spectroscope, spectrogram, etc. I hid those in the picture above, just to show the main mastering window. The "Show more effects" button will produce a 6-band equalizer, a stereo enhancer, and perhaps more.

Again, I am having issues with my screen resolution and scaling and so I cannot see what else is there, but there is more. There are a lot of presets – many of them interesting – which should speed up the mastering process for a hobbyist like me.

Having a separate mastering window is not something I am used to. It is good, as the alternative is to mix the song and then master it, which is labor intensive. It also shows, indirectly, good engineering. Even with today's powerful computer processors, processing effects at the track level and the song level during playback is a serious task. The fact that MAGIX Music Studio 2016 can do that and, at the same time, run a number of spectrometers means that some thought went into making the software computationally efficient.

MAGIX Music Studio 2016 is powerful, well-designed piece of software. I look at it as a software of two layers. First, as a rock musician and a hobbyist recording engineer, I can find everything I need and make use of this software quickly and easily. Second, learning everything else that this software can do seems like a much larger task, but one that is definitely worth pursuing.

Here is a quick example. 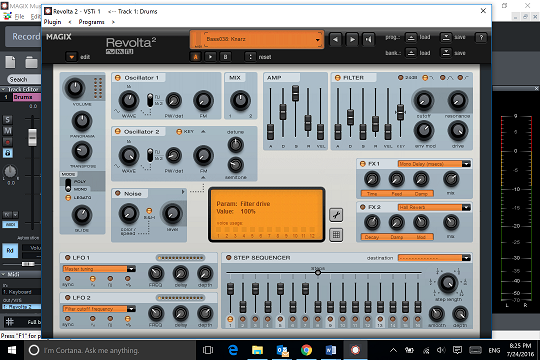 Revolta is a synthesizer. Each track is equipped with one. It seems to combine two oscillators that can produce a sine, sawtooth, or a square wave and apply a number of effects, which sounds to me like a recipe for electronic music (i.e., pads). I could not fully test it, as I get a message to enable ASIO/WASAPI, software monitoring, and input monitoring. I am still struggling with figuring it out. I noted it here mostly to show that there are a lot of pieces to this software that I cannot explore in the 7 days that I have.