Dithering is the process of introducing random noise into a signal to remove errors that are correlated to the signal.

When a signal is recorded digitally (a process sometimes called quantization) and as in the example below, there is a potential for introducing systematic errors. In a periodic signal, the errors will be repeated with the same periodicity as the signal and will be a harmonic distortion of the signal. Due to limitations in digital formats, these errors are unavoidable. Since these errors cannot be avoided, by introducing random noise (dithering), these errors are made non-systematic.

CD quality audio, for example, uses 16-bit signed integer representation of the signal. The values of the signal are recorded with the integer numbers between -32768 and 32768. If the true value of the signal is not an integer number, it would be rounded (up or down) or simply truncated (down) before it is recorded. Thus, CD quality audio ultimately contains rounded or truncated data. Since such truncation is difficult to examine visually with the 44100 Hz 16-bit representation of the CD, consider the following example of a 2 Hz wave (blue) sampled at the sampling rate of 100 Hz and encoded with the 4-bit sampling resolution (red). Although the true value of the wave at sample 5 is 4.702, it has been recorded as 5. Although its true value at sample 6 is 5.476, it has also been recorded as 5. It is impossible to record the wave at its true values with the given sampling resolution of 4 bits. 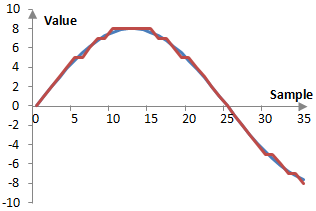 Although experts may argue whether such quantization errors are audible in an audio recording (quantization errors are very obvious in some digital images, such as GIF files, where the color resolution allows only 256 colors), it is clear that such errors are systematic, quantifiable, and unavoidable. If the signal in the figure above repeats indefinitely, the error will also repeat indefinitely, in exactly the same fashion. This kind of error then is periodic with the same periodicity as the signal and is correlated to the signal. In other words, the error is a harmonic distortion of the signal.

Since quantization errors are unavoidable, the best thing to do is to make them non-systematic. Non-systematic errors would not be a harmonic distortion to the signal. We do so by introducing random noise in the signal of similar magnitude to the error.

While dithering does not remove errors, it at least ensures that such errors are no longer correlated to the signal. If we introduce dithering to the signal in the figure above, we might get something similar to figure below. 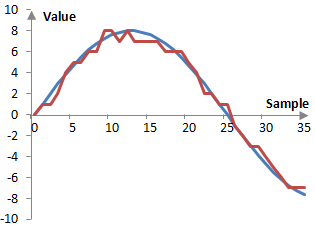 This figure is the result of randomly choosing whether to round up or down each value of the wave. This is equivalent to adding a random number between -0.5 and 0.5 to the wave and then rounding (up or down). This is the simplest type of dithering – one that uses a uniform distribution of the random change to the error and is done for every sample (at the sampling frequency).

The dither can also be changed by introducing errors with a different frequency, which is usually known as dither coloration. The purpose of this is typically to dither with frequencies that are outside of the range, where the ear is most sensitive, say, outside of 1 KHz to 5 KHz (although we should note that the threshold of hearing curves – Fletcher-Munson curves – is always dependent on the signal level and there is no interval of ear sensitivity that is independent of the level of the signal). This can be done by simply filtering the random dither and is also sometimes called noise shaping, although there is a differences between dither coloration and noise shaping. Noise shaping can be applied to reshape the inherent quantization errors without introducing dither at all.