About scale modes and guitar licks

Fate of a Fool

"Fate of a Fool" by J J Cale is a cool song. It could be easy to play with just a guitar and a voice. I play it with three chords: Dm, C, G. It is also fun to solo on.

You could be tempted to solo on "Fate of a Fool" in D minor and that would work somewhat. The issue is the G major chord, as it consists of G, B, and D, and B is not on the D minor scale scale (Bb is). You could try to solo in C major or A minor as these scales fit all of the song's underlying chords (Dm consists D, F, A; C consists of C, E, G; G consists of G, B, D). In fact, these three chords cover all notes of the A minor or C major scale. Soloing in C major or A minor would work somewhat as well, but if you do what you normally do on these scales, your solos would sound awkward. The licks that we learn for major and minor scales start and/or end on root notes and dominants (A and E in the case of A minor; C and G in the case of C major). Such licks then accentuate the wrong notes.

"Fate of a Fool" with Dm, C, and G follows the approximate pattern: "Dm Dm C Dm" with the occasional "G Dm G Dm". So it resolves on Dm. You can think of this song then as written not in D minor, C major, or A minor, but in D Dorian. The D Dorian scale is D, E, F, G, A, B, C and is a scale with the right root for the song (the D) and with all appropriate notes (including the problematic B).

One thing we can learn from "Fate of a Fool" is: It is thus nice to know modes. If nothing else, at least we won't be playing a Bb over a G chord that contains a B.

Recognizing that a song is in, say, D Dorian is half the battle. You still have to figure out how to solo in D Dorian. If you are a guitarist, you undoubtedly find a bunch of guitar book that will show you some patterns of playing scales on guitar similar to the following. 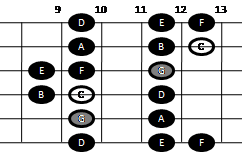 Is this the D Dorian pattern? Not really. The pattern starts on D, but that does not matter. If you are used to playing in the major scale on this pattern you will end up accentuating, just by habit, the tonic C and the dominant G. If you, like me, are used to the minor scale, you will accentuate A and E.

Guitar neck patterns are not scale modes. Somehow guitarists ended up calling neck patterns with the names of modes. That is cool, because now we know various patterns for playing the same scales on different positions on the guitar neck. For soloing in D Dorian though, this does not help.

Here is what could happen if we ignore modes. Take the following sequence of Dm and G.

Click to listen to this solo with the underlying chords

The notes are on the right scale, but the solo sounds a bit strange. It accentuates the wrong notes. The first two bars of the solo play the notes C, D, E, F, G, F, E, D and the notes that come on each downbeat are C, E, G, E. Thus, the solo essentially plays a C chord on the downbeat (the Dm chord comes out only halfway on the upbeat with the notes D and F). The solo is playing a C chord over the Dm rhythm.

Similarly, in the last two bars the solo is playing Am over the G rhythm, which is – again – the wrong chord. The problem is exacerbated by the fact that the rhythm itself comes heavily on the downbeat, but even if the chords were casually strummed up and down the solo will still not be that good.

Compare the solo above to the solo below.

Click to listen to this solo with the underlying chords

Hence, modes matter. In terms of modes the first solo plays the C Ionian (the major scale in C) and the A Aeolian (the minor scale in A). The second solo plays similar notes, but in different order. It starts with the D Dorian and continues to the G Myxolidian.

One way to use modes is to remember things like: "Lydian and Ionian modes fit over major chords", "Aeolian and Dorian modes fit over minor chords" and so on. There are also major seventh, minor seventh, dominant seventh, augmented, suspended, and diminished chords, and so on. There are pentatonic scales, bebop scales, and blues scales with various modes. I bump into different scales and modes when I try different styles. There are different patterns for each scale on the guitar neck and it would be good to know which note falls where in each pattern. This may look like a lot of information, but it is not too bad – the more you play the more you will remember. The more you stick to one style, the less you have to remember.

Most guitarists I know do not really remember scales and modes, but remember licks. We rarely think about this but a lot of guitar licks are already built with the underlying chord in mind. Here is an example lick I posted a couple of posts ago when I wrote about my favorite guitar licks.

The A = A, E, C# and the G in the A7 = A, E, C#, G make sense. But what about the F# and the C in the third downbeat of the second and third bar respectively? These two notes, rather than accenting the A7, give the blues sound to the lick. They hint at the A Dorian blues scale, the second mode of the major bebop scale, which is A, B, C, D, Eb, E, F#, G (the Dorian with an additional flat fifth).

Thus, we are back to basics. It pays to remember licks. A lot of licks have already evolved with the right end result in mind and it would also pay to try to work out – at least from time to time – which licks fit where.