A short drum sound may look something like this. 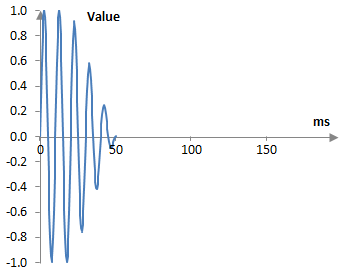 This is, of course, a fake drum hit. A real drum hit may be longer than 50 ms. In the real world, a longer wave recorded at the 44.1 KHz standard sampling rate will also have too many samples, making the drawing of nice intuitive graphs difficult. This, this is simply a sine wave that decays, sampled at 2000 Hz. We will, however, pretend that this is the recording of a drum hit.

We can take this drum hit and run it through the same operations as last time – a two-tap delay, two Shroeder all pass filters, and a feedforward comb filter. Alternatively, we can simply apply the reverb impulse as a filter and convolve the two signals.

The end result will be as in the following figure (the original signal included; note the change in the scale of the vertical access). This is probably not as expected. The peaks around 100 ms are perhaps too large. This is correct however. With this specific signal and with the specific parameters of the reverb, we get some overlapping of the drum hit repetitions around 100 ms that boost the signal peaks. 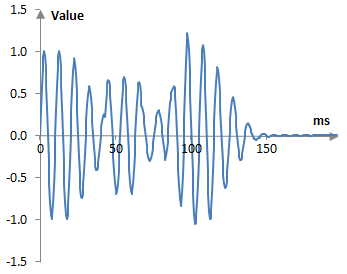 We can break this result down by following the steps of the previous post. First, here is the result of the early reflections – a tapped delay line with two taps, one with a delay of 43 ms and decay of 0.7 and the second one with delay of 67 ms and decay of 0.5 (at the 2000 Hz sampling rate, the delays are 86 samples and 134 samples). The original signal is omitted from the graph below. 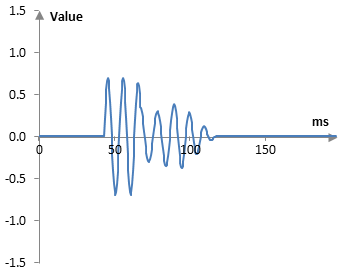 The following is the result of running the original signal through a Shroeder all pass filter with a delay of 3.7 ms (7 samples) and a decay of 0.7. A delay of 83 ms (166 samples) was introduced before the all pass filter. 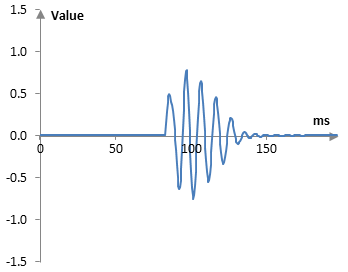 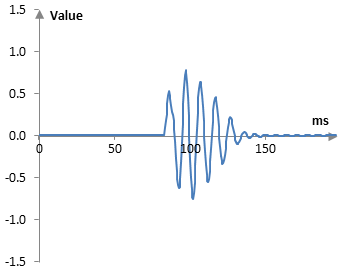 Finally, we take the output of the second all pass filter and put it through a comb. The comb filter has a delay of 11 ms (23 samples) and a decay of 0.7. Again not much difference from the previous picture, but we will obviously not see as much as we can see when working with impulses. It is, however, this comb that introduces the peak in the final signal below. 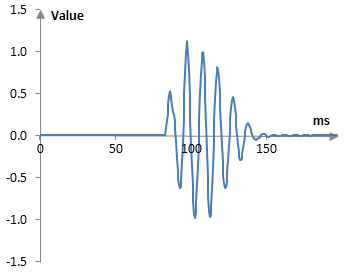 The final signal itself is the sum of the original signal, the two taps of the tapped delay line, and the output of this comb. Our next task is to take the final signal and, pretending that we do not know the exact specifications of the filters, create the corresponding impulse response.