A couple of posts ago I described the idea behind designing the inner workings of the Orinj multitap delay. I ended up with the graph below, but that design is a bit too much in practice. There are a couple of things that can be done to simplify the effect. First, the gains on the input signal of each of the delay units are unnecessary (the two top triangles in the first picture below). Given that the delay unit simply repeats the signal and that there are decays (gains) for each of the output signals, the input gain is redundant. I removed it from the design. Second, I scrapped the separate feedback and tap gains of each of the delay units. I added one gain to each delay units that controls both the feedback and the tap signals. Third, to achieve some similarity across Orinj effects I included a single “wet mix” gain common to all delay units.

From the original design shown here

I ended up with the following one.

As you can see the gains on the input signals into the delay units are gone. Feedback and tap are controlled by one gain control (the triangle first to the right of each unit). There is also one common wet mix gain that applies to the collected tap signals from all delay units. This design is simpler.

Here is an experimental implementation of the user controls for the effect.

Thus, the delay has two tabs: one called "General" and one called "Delay units". The general tab contains overall controls for the effect. The delay unit tab contains controls specific to each delay unit. The picture above shows the General tab. The picture for the Delay units tab is below. The dry mix slider controls the gain of the direct input-to-output signal (the bottommost triangle at the design schema). The wet mix slider controls the wet mix gain common to all delay units. The maximum repetition controls replace the gate (one for each channel). The two checkboxes do what they describe: invert the polarity of each of the channels, which is only interesting if the two channels have similar delay times and different polarities.

The Delay units tab is as follows. 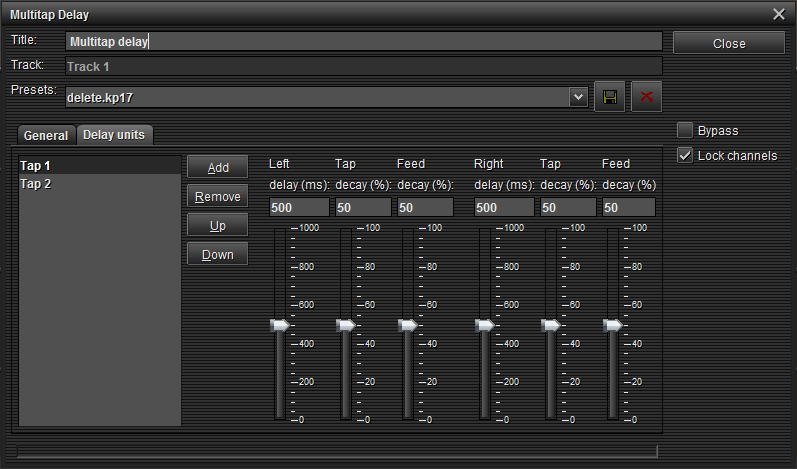 At some point I will describe the programming of the inner workings of this effect. It is not that interesting. A multitap delay is just a series of signal repetitions. What is more interesting is that this effect with its current design has common characteristics with all other Orinj effects: wet and dry mixes, presets, bypasses, etc. I specifically combined the tap gains into one wet mix gain to get that common characteristic. Since Orinj effects have similarities, they allow us to start creating a simpler common effect plug-in framework. If we succeed in that endeavor, we can allow developers to develop their own effects and plug them into Orinj during runtime. The new plug-in framework is almost there and should be operational in version 3 of the software, but I will write more about that later.