The term phase can have several meanings, but for our purposes the phase of a wave is, say, the displacement of the start of the wave's cycle from the start of time. For example, a wave of frequency f can be written as sin(2 π f t), where t is time. The wave starts with a value of zero as at t = 0 we have sin(0) = 0. The wave completes a full cycle between t = 0 and t = 1 / f and at t = 1 / f we have sin(2 π) = 0. Since the cycle of the wave is completed in 1 / f time units, in one time unit the wave will complete f cycles. The wave thus has a frequency of f. This wave's cycle starts at 0. If we want to displace the wave, we can use

where T is some constant amount of time. This wave starts its cycle at t = T and hence we can call T the phase of the wave. Alternatively, and more often, we can write the wave as

where ω is the angular frequency &omega = 2 π f and θ is the angular phase θ = 2 π f T. In this case, the displacement of the start of the wave cycle is expressed as an angle (i.e., in radians). For example, since a wave completes a cycle in 2 π, then a phase of θ = π will denote half of the wave's cycle.

Why is phase important?

A complex sound wave may consist of many simple waves. If this complex signal is sent to an equipment or software and we get an output signal of a different phase, we should be careful then of adding the input and output signals together. Even if the change in phase (the phase response) is the same across frequencies, it will have a different impact on the amplitude of each frequency and will thus change the frequency content of the signal.

It can be shown that a finite impulse response digital low pass filter the coefficients of which are symmetric around the middle delays the input signal by (N – 1) / 2 samples, which is equal to (N – 1) / (2 fs) seconds, where fs is the sampling frequency. This is the filter's phase response. As above, this delay in time is a delay in phase of 2 π f (N – 1) / (2 fs) radians. This makes sense, since as f increases, the wave cycle becomes smaller and the same number of samples is equivalent to a larger delay in angle. The most interesting part of this computation is that the phase shift is linear with respect to f / fs. Thus, this filter is said to have "linear phase". 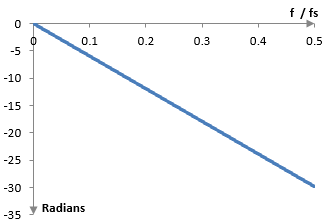 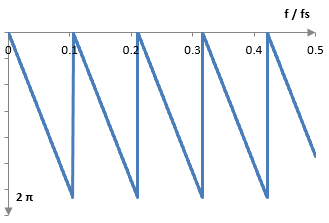 Phase response given a transfer function

The phase response of a system with transfer function H, at the frequency ω, is

This follows directly from the definition of the transfer function (see Transfer function)). The "arg" function returns the angle between the complex number H and the horizontal axis. For example, when the Re{H} > 0 then arg{H} = arctan( Im{H} / Re{H} ).

and its Z transform transfer function H(z), evaluated at frequencies with magnitude 1 (at z = ej ω), is

(The arg function does not always return the arctan, so the complications here are a bit simplified.) In the sum in the numerator we can take each two terms with equal coefficients a(k) and a(N – 1 – k) and compute

In the denominator, each two terms with equal coefficients similarly produce

and the phase response becomes

The "1 + " is there to handle the middle coefficient, assuming that the filter has an odd number of coefficients N. If N is even, the computations will be the same, but without "1 + ". Then

This is the same result, which was explained in an ad hoc manner above (ω = 2 π f / fs). Thus, the phase response of a finite impulse response filter with coefficients that are symmetric around the middle is linear with respect to the angular frequency ω.