An impulse is a signal that is zero everywhere except at a specific point of time. Simplistically, an impulse is an instantaneous pulse in an otherwise zero signal.

This signal consists of zeroes, except for a single 1 at one of the samples. This signal is an impulse.

The Kronecker delta function is also sometimes defined as a function of one integer argument and with values of zero everywhere, except at zero, where it is equal to one.

The Kronecker delta function will produce the example digital signal above.

When an impulse is an input to a system – equipment, software, and so on – the system will produce some output signal. This output signal is the impulse response of the system.

In the first example below, when an impulse is sent through a simple delay, the delay produces not only the impulse, but also a delayed and decayed repetition of the impulse. This is what a delay – a digital signal processing effect – is designed to do. The impulse response is the output signal, which consists of an impulse and a delayed and a decayed impulse.

The second example below is the impulse response of an actual bass amplifier and speaker combo. A bass combo will not reproduce an impulse perfectly, as it will also add the reverberations of the chassis, some frequency coloration from the amplifier and speaker, and so on. Thus, the impulse response of the bass combo is not just an impulse, but something more complex.

A simple delay takes a signal and creates one delayed and decayed (with lower amplitude) repetition.

If, for example, the delay repeats a signal with a delay of 5 samples and with 75% of its original gain, then the delay will produce the following output from the impulse signal above (including the original signal). 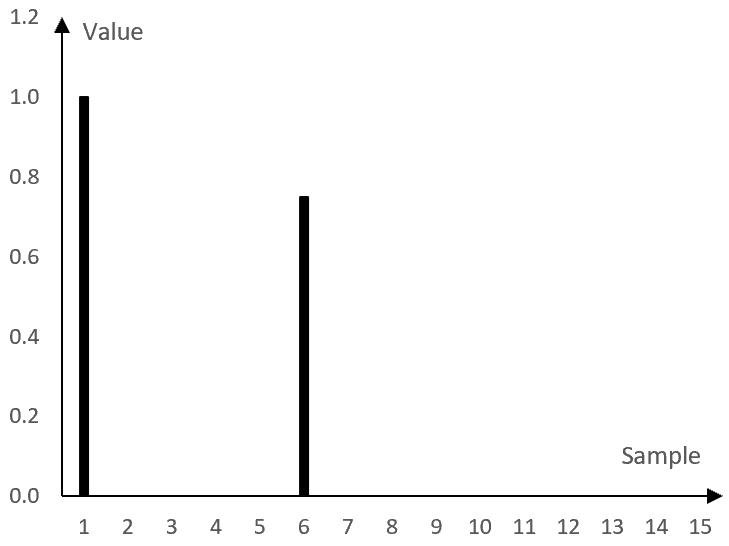 We can use the impulse response of the simple delay above to compute what any signal will become after being processed through the simple delay. This computation is shown in the following graph. 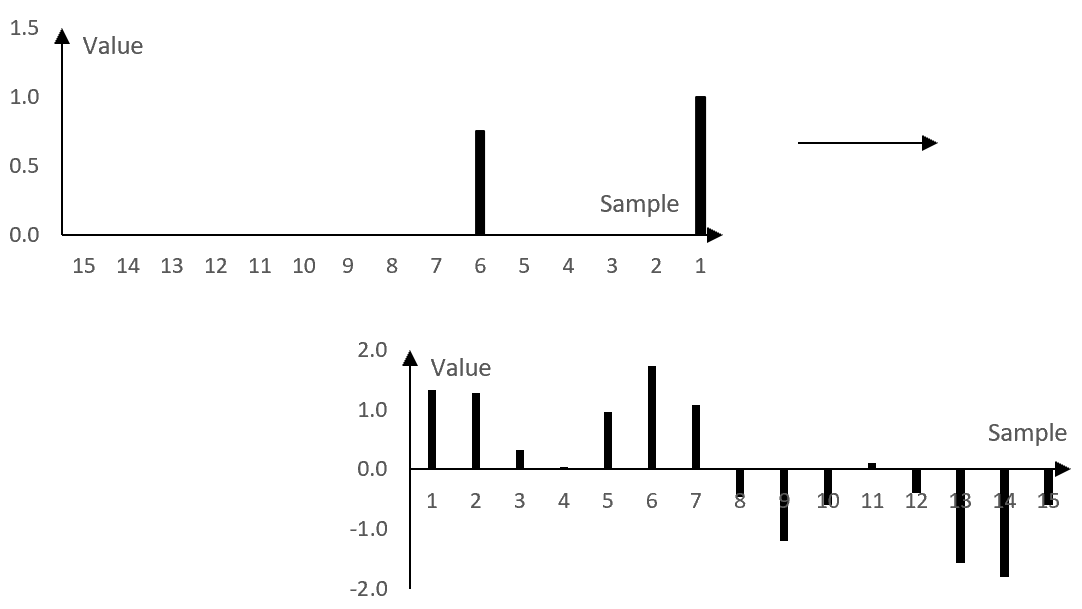 In this graph, the impulse response of the example simple delay is on top. The values of an example signal are below.

This process continues until the whole input signal is traversed and all samples of the new signal are computed. The process itself – the summation of products (a moving weighted average) – is called "convolution". If x(k) is an input signal to the simple delay and a(k) is the impulse response of the simple delay with length N samples, then the output signal y(k) is the convolution of x(k) and a(k).

The same process is used also with more complex impulse responses, such as the ones below. 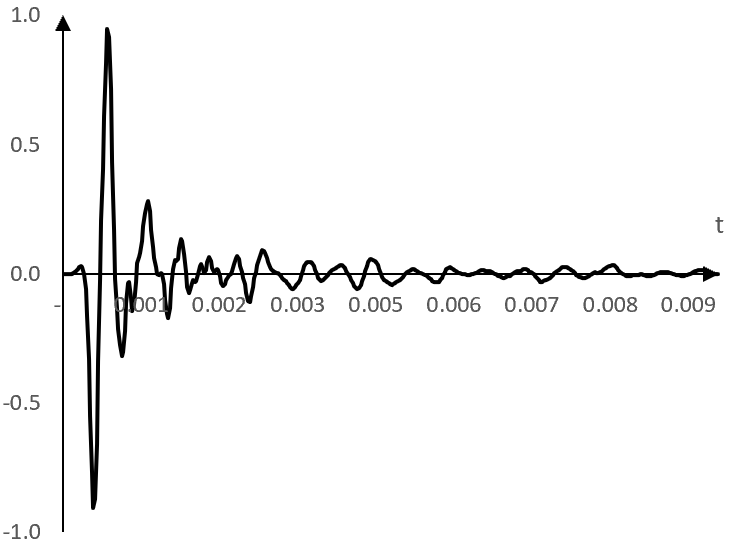 Here, k are the samples, N is the length of the impulse response in number of samples, fs is the sampling frequency, and f is the cutoff frequency (the frequency around which the low pass filter transitions from a filter that passes the low frequencies to a filter that stops the high frequencies). 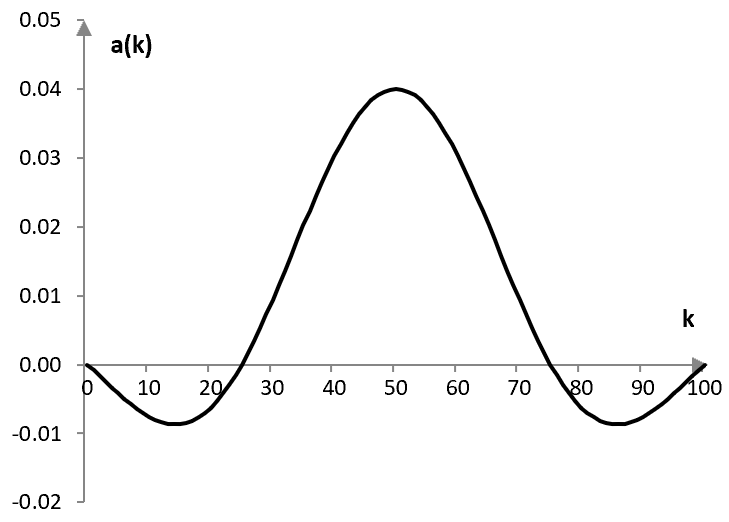 The filter is not defined outside of its N points, but could be defined as equal to 0. In practice, when using such filters, this is sometimes necessary. In a convolution, setting the filter to 0 outside of the N points does not change the output of the convolution.

This filter is "recursive", which means that its values depend not only on the input to the filter x(k), but also on its previous outputs y(k). Sending an impulse through this filter will produce the following impulse response. 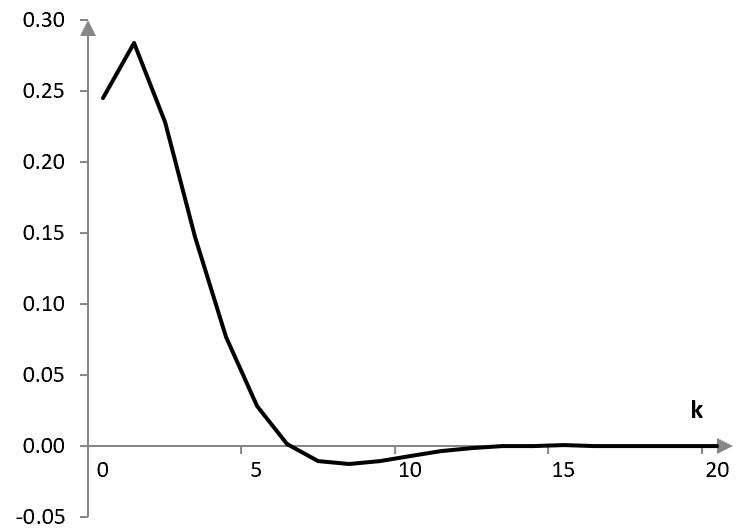 This impulse response has the potential to be infinitely long and never settle to zero. This filter is an "infinite impulse response" filter or an "IIR" filter. In practice, digital signals can only take a finite number of amplitude values and so this filter will have to settle to zero at some point if it settles at all. Nonetheless, it is called an IIR filter.

Impulse responses as a description of the system 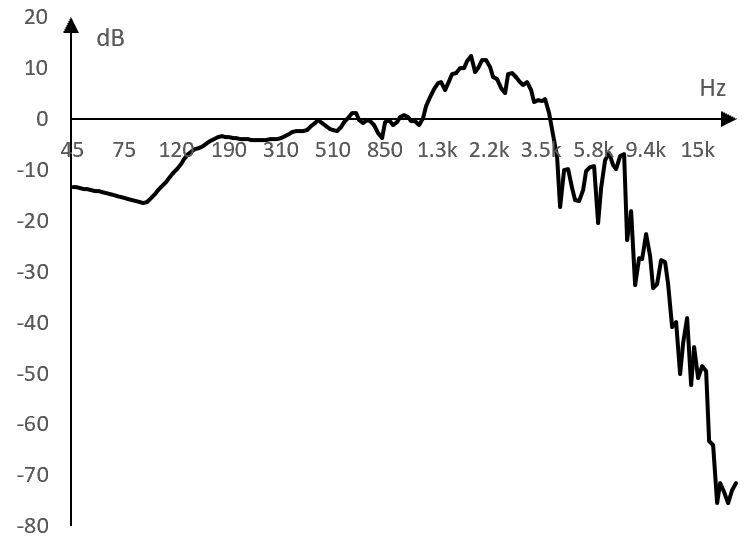 This graph tells us, for example, that the impulse response of this bass combo has a significant roll off in the magnitude of frequencies above 9-10 kHz.

Most of the impulse responses here rely on the mathematics behind digital signal processing theory.