An intuitive example of drum compression

A look at the snare

There are two reasons to look at drums, when it comes to compression. The compressor settings for drums that are usually recommended for getting "sharper" drums in the mix are all the same. With these, we know where to start. These settings are used below. Also, the drum hits – snares and kicks specifically – are very short. Even with the snare (and drum frame) ring, a recorded snare sample is almost always less than one second long, which makes it easy to work with and display visually.

Here is a picture of the actual snare hit. The recording of this snare hit can be heard below. 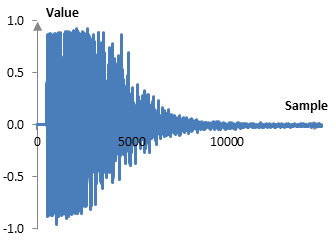 This is an actual 44.1 kHz 16-bit recording of a Yamaha Recording Custom 14x10 inch snare. The digital recorded samples were extracted from the wave file and placed in Excel to produce the graph above. The snare was recorded as a simple experiment with an SM57 pointed at the top edge of the snare (the usual top-and-bottom approach to getting a good snare was not used). There are a couple of problems with this recording, which are discussed below. As can be seen on the graph, the ring of this snare hit is quite long – over 5000 samples, which translates to over 0.1 seconds with the 44.1 kHz sampling rate. The purpose of the compressor would be to decrease this ring, while preserving the initial accent, thereby making the snare sharper in the mix.

To get a shaper snare, an engineer can obviously "ride the gain". The engineer would have to leave the gain as it is for the initial hit, but lower it for the subsequent ring. In the past, that would have been impossible – no engineer is that fast. Today, we can do so with various software, but, still, going through every snare in the recording would be time consuming and exhausting. This is where compressors come in. A compressor would adjust the gain automatically throughout the whole recording.

Getting the volume / amplitude envelope

To be able to work with the amplitude, the compressor will need to know what the amplitude is. Since a recorded wave oscillates many times up and down, not every point of the oscillating wave clearly indicates the amplitude level. There are a number of ways to measure the amplitude of a wave – peaks, Hilbert transforms – and some of these are quite mathematically involved. For the exercise below, to simplify things, we use an ad hoc root mean square (RMS) amplitude measurement – somewhat of a moving average of sample values. Obviously, different measures will produce different results, but this is not the point of this post. The following is the amplitude of the snare. 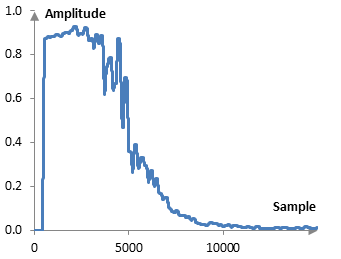 This is normalized amplitude. In 16-bit recordings, the absolute value of recorded samples can go from 0 to 215, but we can divide these values by 215 to normalize everything in the range of 0 to 1.

The typical compressor settings for getting sharper drums in the mix are:

In the range of 0 to 1, the -5 dB threshold translates to 10-5/20 = 0.562, if we assume that 0 dBVU is maximum amplitude. The -5 dB compression threshold on the amplitude envelope above would look something like this. 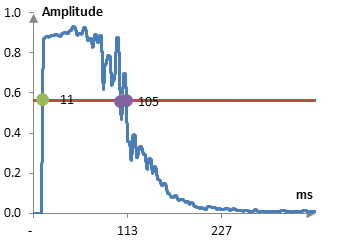 The resulting amplitude envelope, compared to the original one, should look something like the following. 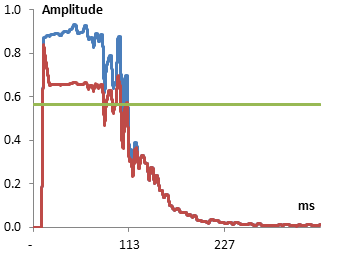 With everything above, it is pretty obvious what the compressed signal should look like. The original and compressed snare hits are shown below. 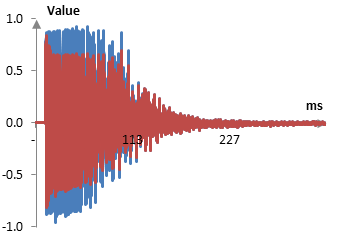 Thus, the compressor preserves some of the initial accent and decreases the amplitude of the remaining ring. Since the signal amplitude crosses the threshold a bit before the peak of the amplitude of the initial hit, the initial hit is slightly lower. Some additional output gain (perhaps 1 dB) should be added to the signal. In fact, since now the snare may sound very different, more than one dB could be needed. Most compressors will allow for additional output gain.

Some additional info on compression

In full honesty, the compression settings used for the sound recording were different. This is because of the specifics of this sound recording, which are explained below. In short, this was not a very good recording. It clipped at the beginning and rang too much at the end and so a larger attack (30 ms), larger release (150 ms), and larger compression ratio (4:1) were used. These "larger" settings also helped with getting a sufficiently pronounced difference between the original and compressed samples in the sound clip above.

Here is an extract of the initial uncompressed hit. 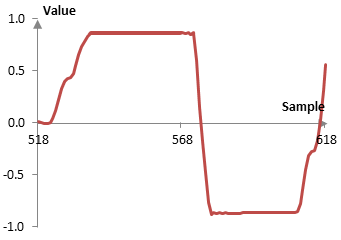 Although the initial hit of a drum never looks pretty, this seems to be an obvious clip. With this type of recording, the actual amplitude envelope computed with the Hilbert transform – which is what most compressors will do – looks as follows. 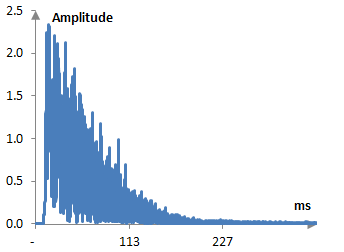 This is a much more difficult amplitude envelope to understand and work with. A specific problem with this envelope is the excessively high amplitude computed at the beginning (of over 2), which will result in a very significant dB drop during the compression depending on the attack and may warrant a slower attack (a slower attack was used for the actual sound clip).

Some issues with compression after release

What is really not obvious is what a compressor does during a release, when the amplitude of the signal is below the threshold, but the compression ratio has not yet returned to "no compression". The formula above cannot possibly apply and there is basically no explanation to be found on the net. Here are the steps that the compressor in this example uses to do its job, which are designed to be as simple as possible. These may be different than the way other compressors are designed.