A compressor / expander of dynamics changes the amplitude dynamics of sound, usually bringing the amplitude of soft and loud parts together (compressor), or taking them further apart (expander).

For example, if you are recording the vocals to a song and these vocals have quiet and loud parts, you could do of the following: 1) you would come closer to the microphone during the soft parts and pull back during louder parts; 2) you would have your engineer change your gain up and down during the song; 3) you would run your vocals through a compressor. All these are examples of compression.

Examples of compressors and sound samples

For example, you can set a threshold of -20 dB and the compression ratio at 4:1. If the sound level exceeds -20 dB it will be brought down by a ratio of 4 to 1. If, for example, the sound level is at -10 dB, which is 10 dB over the threshold, it will be brought to 2.5 dB over the threshold, which is to -17.5 dB. In simple compressors the sound at levels under -20 dB will remain unchanged. The end effect of this is that loud parts are brought down closer to soft parts. (Here the signal will be measured in decibels with respect to some maximum signal level of the system – of the equipment or software. That maximum output level is at 0 dB.)

Simple expansion works similarly, except that louder parts will be made even louder to move them further away from softer parts, which could be useful for bringing different instruments together (see below).

More complex compressors have other characteristics.

One of the reasons for using compression is to control the amplitude dynamics of instruments, as they may have different qualities when recorded loud or soft. You can capture the natural qualities (timbre) of soft and loud vocals without worrying about losing the soft parts in the mix or overpowering the mix with the loud parts.

Compression can also be used to add sustain to instruments that decay quickly. Compressing cymbals, for example, ensures that the cymbal initial hit on the cymbal is brought closer to the cymbal decay. Adding some compensation gain then brings the cymbals up in the mix and adds sustain.

Compression is often used in "de-essing". Sibilance frequencies in vocals can be filtered out from the mix with an equalizer and used to trigger the compressor. The compressor then acts only when those frequencies are present effectively lowering sibilance in the mix.

Compression can be used for "ducking". For example, a side chained compressor can decrease the volume of the bass during the hits of the drums, as is done in electronic dance music to make the drums more pronounced and the drum and bass mix less muddy. This compressor will begin to act every time the drums exceed some amplitude threshold, but instead of compressing the drums, will compress the bass. A similar side chained compressor can be used to decrease the amount of vocal reverb during pronounced vocal parts (syllables), thus making sure that the reverb does not smear the vocals. Such compressors effectively separate two instruments or two signals in the mix.

Another reason to use compression is that songs that are less dynamic can take less storage space (especially in the digital recording world, where you can work with smaller numbers to carry the information). Radio signal is compressed for that reason.

A typical graph that represents the relationship between the input and output levels of a compressor is as follows. 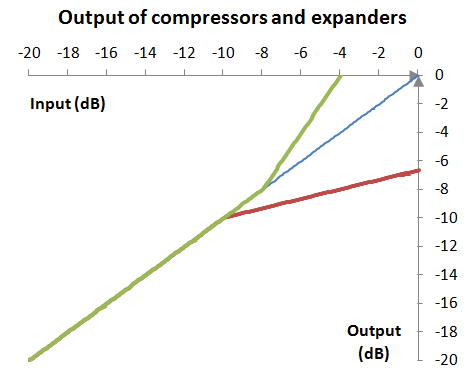 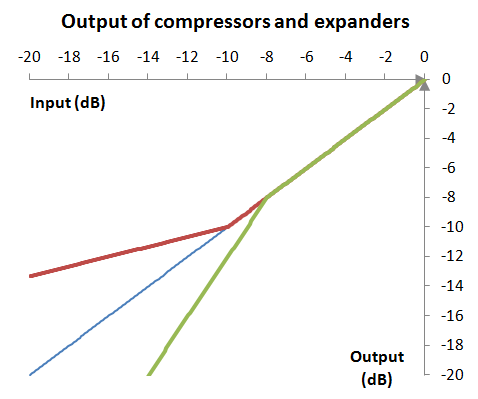 The red line would be an example of a compressor, even though compressors typically work as in the first graph above. 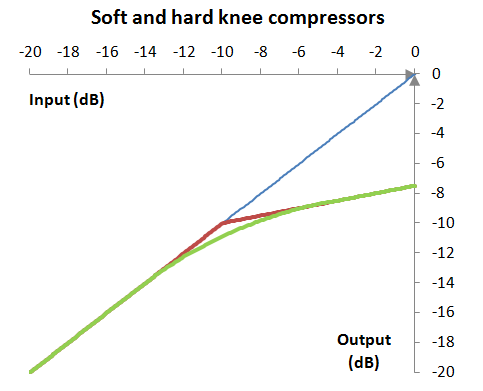 A limiter is simply a compressor with a very high compression ratio and with very fast attack and release. A limiter usually has a compression ratio higher than 10:1, attack of, say, less than 5 ms, and a release of up to, say, 20 ms, although limiters vary. A limiter that has a compression ratio of 20:1 or over is known as a "hard" limiter or a "brick wall" limiter. Limiters can be designed to prevent overload on analog systems (overloads in digital systems do not occur in the same way, as the amplitude of digital audio is naturally limited to its sampling resolution).