A converter that removes negative frequencies from an analytical signal is called a Hilbert transform.

Consider the following complex signal x(t) which contains both the positive and negative frequencies ω and -ω.

or, more appropriately, the discrete version (for N odd)

and to apply the inverse discrete Fourier transform. We get the Hilbert transform

When N is even, we can similarly obtain

For very short transforms (e.g., N = 10), the Hilbert transform can be approximated by

A Hilbert transform FIR filter of 101 points is shown below. 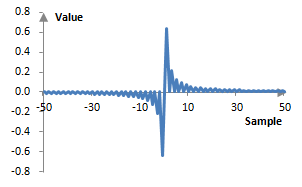 The impact of this filter on a simple wave at 100 Hz sampled at 2000 Hz is shown on the figure below. This filter shifts the wave by a quarter of its cycle. 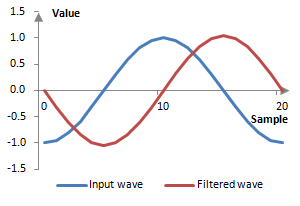 Since the filter is finite and thus imperfect, however, it does not preserve the magnitude of all frequencies. The magnitude response of the example filter for the beginning of the frequency spectrum is as follows. 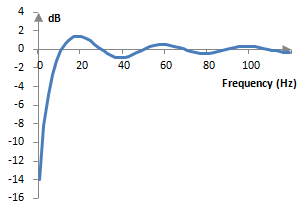 This filter would exhibit similar loss of amplitude close to half of the sampling frequency. It is a band pass filter. This amplitude loss on both ends would be smaller for filters of larger length, and it would disappear faster for the upper end of the frequency spectrum and slower at the lower end. The magnitude responses of the Hilbert transform filters also show the characteristic Gibbs phenomenon ripples, which can be modified through windowing with the same windows applied to other FIR filters.

Note however, that the Hilbert transform is a FIR filter with coefficients that are symmetric around the middle and so it introduces a delay in the transformed signal of (N – 1) / 2 samples, where N is the length of the Hilbert transform (for N odd; the delay will be N / 2 for N even). Prior to computing the amplitude envelope, we must delay the original signal. The computation of the amplitude envelope is as follows.

The graph below shows a complex signal x(k) sampled at 2000 Hz composed of two simple waves at 100 Hz and 130 Hz with varying amplitude. The amplitude envelope is computed using the formula above. 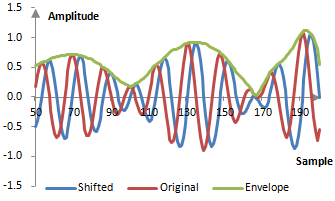