I read a few articles about flangers vs. phase shifters and watched some videos. I found them unsatisfactory. It is hard to tell the difference. Many videos talk about more or less "whooshing", "bright", and "pronounced", but all of that means little to me and depends on the settings. Also, videos contradict each other.

Having designed flangers and phasers, I would say:

But don't trust me. Descriptions for these effects are often very different than mine. Just read more below.

Here is a graph of the magnitudes of some frequencies, when combined with a delayed version of themselves. We use a short delay of 20 milliseconds. 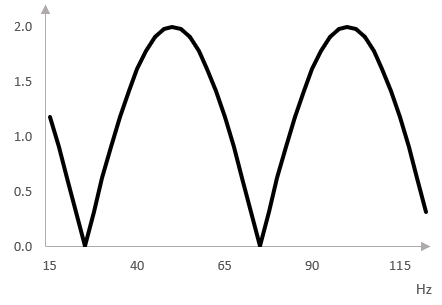 The amplitudes of the frequencies 50 Hz and 100 Hz are doubled. This makes sense. The period (cycle) of 50 Hz is 1 second / 50 = 0.02 seconds = 20 ms and so this wave is delayed by exactly its period. The delayed version is indistinguishable from the original. Adding the original and the delayed is the same as doubling the original wave.

Frequencies that are not multiples of 50 are reduced in magnitude by various amounts. The frequencies 25 Hz, 75 Hz, and so on are zeroed out. This also makes sense. The period of 25 Hz is 40 ms and so this wave is delayed by half of its period (it is inverted). The original wave, when combined with the same wave, but with inverted phase, gets zeroed out.

The graph looks like a comb, so the simple delay is a "comb filter". The position of the notches depends on the amount of delay.

The flanger delay is not all. In a flanger, the delay varies slowly up and down.

When the delay varies, the delayed portion of the signal speeds up and slows down. This means that it changes pitch (higher pitch when sped up; lower pitch when slower).

When the pitch of the delayed signal changes (both up or down), the notches of the magnitude response of the graph slowly disappear. 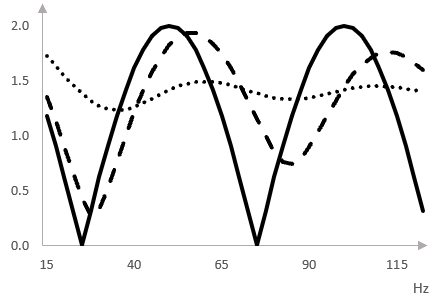 The larger the change in pitch (up or down), the flatter the magnitude response is.

What we hear in a flanger

For me, the most pronounced part of the flanger is the combined vibrato and tremolo.

The following is one type of an all pass filter that can be used in a phaser. If the input and output signal at sample k are x(k) and y(k), then the filter is

The constant d is the "decay" of the filter (somewhere between 0 and 1). This is just an example and there are other types of all pass filters that can be used by a phaser.

A single all pass filter like the one above does not do much. It simply passes all frequencies, but with changes in phase.

Things get interesting when we use more than one all pass filter.

When the signal passes through two all pass filters, one after the other, and is then combined with the original signal, the resulting magnitude response is as in the graph below. 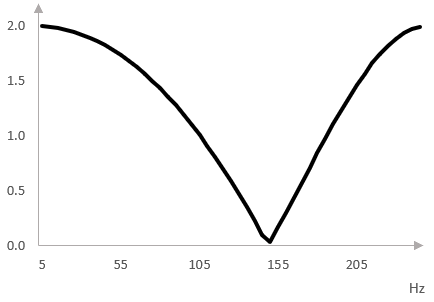 The positions of the notches depend on the all pass filter decays. In the graph above, the decay of the first and second filters is 0.1 and 0.2.

Most importantly, when the decays of the all pass filters vary (up and down), the notch shifts (right and left respectively). It does not disappear.

Here is the graph when the decays are as in above (solid line), doubled (dashed line), and quadrupled (dotted line). 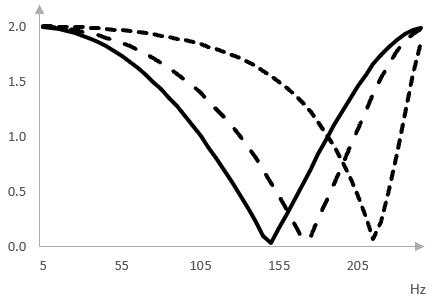 What we hear in a phaser

For me, the most pronounced part of the phaser is exactly the wah wah quality.

I am focusing on the movements of the flanger and phaser and not on the coloration. There is a reason for this – to hear just how the two effects differ, I use settings that make the movement very pronounced.

Both the flanger and the phaser can be rich in settings. The flanger can have the following parameters: frequency of oscillation in the delay, center of the delay, min and max delay (or pitch), gains on the original or delayed signal. The phaser can have: center of each all pass filter, frequency of oscillation of the filter decays, min and max for that oscillation, gains on the dry and wet signal.