An equalizer adjusts the magnitudes of selected frequency intervals in a signal.

Examples of equalizers and sound samples

See Orinj Graphic equalizer, Orinj Parametric equalizer, and Orinj Simple equalizer to hear sound samples before and after an equalizer.

In practice, equalization typically involves reducing the magnitude of frequencies that are overwhelming in a mix or sound offending. Examples include frequencies:

For example, to remove boominess in vocals, one can use an equalizer that is flat, except for a narrow band of frequencies somewhere between 100 Hz to 300 Hz. The magnitude of frequencies in that band is reduced and these "offending" frequencies thus become less audible.

The exact position and width of the band depend on the recording and requires experimentation (see also the discussion of Q factor below). The values above are simply guidelines. For some recordings, the offending frequencies can be outside of the bands listed above.

Occasionally, equalizing involves increasing the magnitude of frequencies. Examples include:

The equalizer quality factor or "Q factor" describes how precise the equalizer is. The Q factor is the ratio of the midpoint frequency of the band that the equalizer is adjusting to the width of the same band.

For example, if the middle frequency is 200 Hz and width is 100 Hz, then the Q factor is 2. (The width of the band is typically measured at -3 dB. The choice of -3 dB is briefly described in the topic Butterworth filter).

The following DSP example creates a two-band equalizer can be created. This example uses finite impulse response filters and has only two bands, which does not allow choosing narrow bands or Q factors, but is simple enough to show how equalizers can be created. 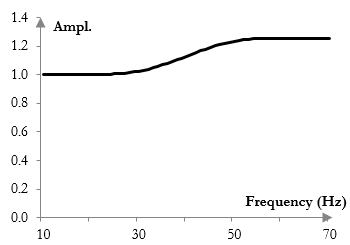 The detailed steps to creating the equalizer are as follows.