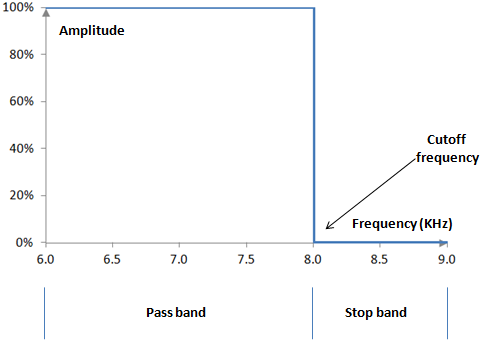 Mathematically, the magnitude response H of this ideal low pass filter is a function of the incoming frequency f that looks something like the following. 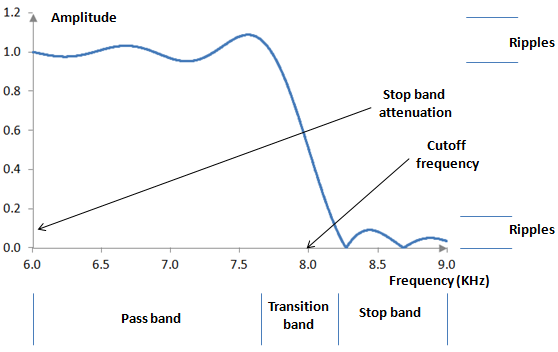 The ripples in the pass band and in the stop band are characteristic of many, but not all filters. The Butterworth filter, for example, does not have ripples. The magnitude response of a Butterworth low pass filter is monotonically decreasing. All finite impulse response filters, on the other hand, have ripples, which are due to the Gibbs phenomenon – a manifestation of the fact that the Fourier series used to create these filters is a series of continuous functions, whereas the ideal magnitude response above is a discontinuous (although continuously differentiable) function. 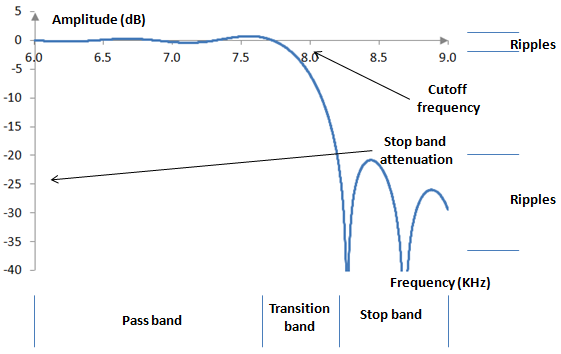 Given a discrete-time transfer function H(z) , computed with the Z transform, of some linear time-invariant system, the magnitude response of the system is given by

where Re(H) and Im(H) are the real and imaginary parts of the complex number H. (The continuous-time equivalent would be |H(jω)|; see Frequency response for more detail). Say that this is a finite impulse response digital filter with length N and weights a(k) and a transfer function H(z). The magnitude response of this filter can be computed with the following formula.

Here H(f) is the magnitude response at frequency f, a(k) are the weights of the filter at samples k = 0,…, N-1, and fs is the sampling frequency. (Setting z = ejω in the Z transform produces the discrete-time Fourier transform. Euler's formula gives us ejω = cos(ω) + j sin(ω). The angular frequency ω can be replaced with ω = 2 π f / fs).