In music, distortion is the sound effect that occurs when the amplitude peaks of a signal are compressed or cut off when the audio equipment is overloaded.

See Orinj Distortion to hear a sound sample before and after distortion.

More generally, this type of distortion will occur whenever the underlying wave form of the signal is changed because the amplitude of the signal is being changed too quickly. A compressor with very fast attack and release, for example, may introduce distortion.

An aural exciter is a distortion effect that uses a high pass filter to separate and distort only high frequencies. See Orinj Aural exciter to hear a sound sample before and after an aural exciter.

The following is an example of a hard-clip distortion:

The result of using this type of distortion on a signal is as follows. 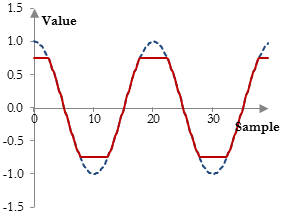 The signal peaks are simply cut off.

The following is an example of a soft-clip distortion (known as the cubic soft clipper).

With larger w, the clipping becomes softer and closer to the peak of the wave. The result of using this distortion on a signal is as follows. 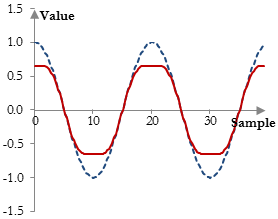 The following is an example of distortion that compresses the signal peaks, but does not clip them. 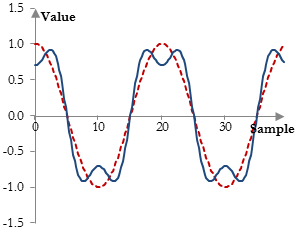 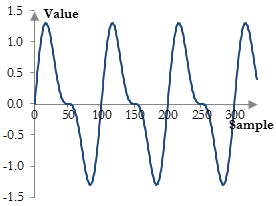 To introduce even order harmonics, we need to look at operations that expand the signal peaks rather than compress them, which is not distortion as defined here. Example such operations are:

Distortion outside of music production