The Orinj Distortion simulates actual distortion by clipping, compressing, or expanding the wave peaks of a signal. There are many ways to introduce distortion to a signal (see Distortion). It will occur whenever the form of the waves in the underlying signal is changed, which may occur when those waves are clipped or when the amplitude of the signal is being changed very quickly, even if the waves themselves are not clipped (a compressor with very fast attack and release may introduce distortion).

The Orinj Distortion can be added to tracks in the multitrack session view, tracks in the loop building view, and to waves in the single wave view. In the multitrack session view and in the loop building view, first select the track to which you want to add the effect. In all these views, click on Effect, Dynamics, and then on Orinj Distortion in the Orinj menu. You will see the following dialog. 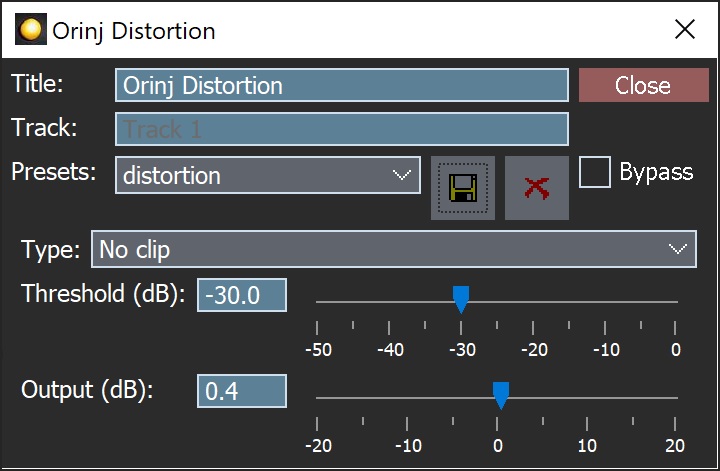 When this dialog becomes visible, the Orinj Distortion effect has been added. Adjust the parameters of the distortion in the dialog above and click Close. These parameters are described below.

See Orinj Effects for an explanation of the Title, Track, Presets, Bypass, and Lock channels controls. The remaining Orinj Distortion controls are described below:

The Orinj Distortion supports dry and wet mix changes. That is, you can adjust the mix between the original signal and the distorted signal. See Orinj Effects for more information. The dry and wet mix in the Orinj Distortion are very important. By default, both are set at 100%, which means that the distorted signal is mixed with the original signal. The distortion itself will not be very audible. You must lower the dry mix of this effect to hear a good amount of distortion.