One example of this process is presented in the topic Sine sweep. Sine sweeps are good candidates for the sound to be played and recorded, because computing the impulse of the reverb from the resulting signal is easy – the resulting signal is convolved with the sine sweep inverted along the time line, usually with some adjustments to its amplitude. Since the convolution can be computationally intensive, if done in the time domain, it can be performed in the frequency domain.

The example below is another example. Rather than using a sine sweep, it uses a short (transient) sound. This is not the preferred method but is easier to understand.

Short sounds were the early candidates for sounds to be played and recorded, because it was assumed that it would be easier to compute the impulse of the reverb if the original signal resembled an impulse.

Suppose that we have two recordings of the same drum hits – one dry, without reverberation and one with the natural reverberations of the room. The following graph is an example of what the recorded dry drum hit signal may look like.

The reverberated drum hit may be as in the graph below. 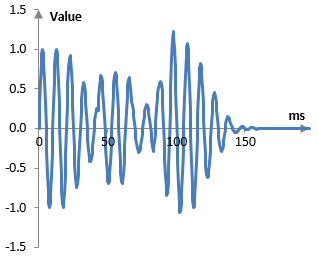 The resulting impulse response with the example above is shown in the following graph. 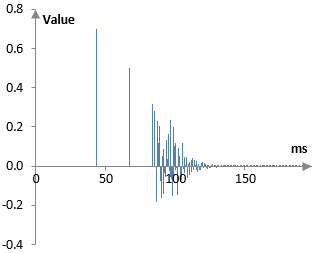 (In this particular example, the first two notches of the impulse response are the output of the tapped delay line. The remainder is the output of the Shroeder reverb, in which the all pass filter create a multitude of successful repetitions and the one peak in the middle of these multiple repetitions is created by the comb filter. The impulse response above omits the dry signal and presents only the reverberated portion).

Computing the impulse response in practice

If the differences are minor, the computation above may still work. The following graph shows the impulse response from above (blue) and an impulse response (red) computed with the same reverberated recorded signal, but a different dry signal (a dry signal with slight random errors between -0.02 and 0.02 in each sample). 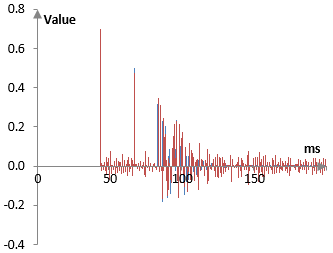 In some cases, as in the one here, depending on the error, the computation above may produce an impulse response, the tail of which does not decay or even becomes infinitely large. In such cases, the impulse response may be decayed artificially.

To reverberate any sound, the impulse response is convolved with that sound as in the graph below.

If a(k) is the impulse response of length N + 1 and x(k) is the dry signal, the convolution computes the reverberated signal y(k) with the formula

Now all is clear, thanks for an explanation.

You're my only hope guys =(

I love all your posts. You have done great job

Whoa! This is by far the most helpful thing on the subject I have ever found. Thanks for your hard work.

How to disable singature?

Hi :). I am from Netherlands and i don't know how can i disable my signature? Regards :)

What was the last song you sang along to?