A reverb is an audio effect that attempts to replicate natural reverberation – the multitude of delayed reflected sound repetitions when a sound is produced in a closed space.

We use the term "reverb" to distinguish between the natural reverberation and the artificial reverb effect. The artificial reverb is important, as it brings liveliness and natural qualities to the sound. This is what it is designed to do – to simulate the real life effects of a sound in a room, a club, or a concert hall. In addition, most contemporary music already has artificial reverb and that is what listeners are used to. A musical piece would sound "unnatural" without the artificial reverb. In short, reverb makes sound recording less dry and boring.

Examples of reverbs and sounds samples

See Orinj Reverb and Orinj Simple reverb to hear sound samples before and after the reverb.

Properties of the natural reverberation

Natural reverberation is a complex phenomenon. Whenever a sound is produced in an enclosed space – a room, a club, or a concert hall – it is reflected by the walls, furniture, and other objects in the space. There is a multitude of reflections that interact with each other and that may be indistinguishable from each other. In a room of four walls, a single sound source will be reflected directly at least four times – one from each wall. That is, if the indirect reflections from the sound origin to a wall to a wall to the sound receptor and so on are ignored. Some of the original amplitude of the sound will be lost in each reflection, but each of the four reflections will result in at least four other reflections and so on.

Since there are too many reflections in natural reverbs, it does not make sense to try and characterize the reverb by describing each reflection. Instead, one can describe the properties of the overall reverberation phenomenon. 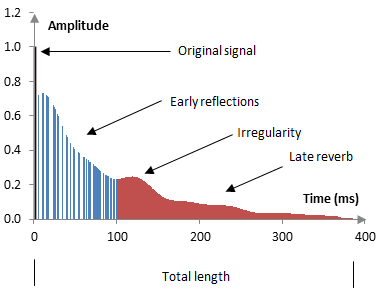 Older recordings simulated reverberation in various ways – using chamber, spring, or plate reverb units. Some of these are still used today. A chamber reverb unit uses microphones placed around a room to pick up the natural reverberation of the room. A plate reverb unit directs the sound towards a metal plate. The metal plate vibrates with the sound. The metal plate vibrations, which include the original sound vibrations and some residual ones (the reverb) are then picked up. The spring reverb works similarly to the plate reverb, but uses a spring instead of a plate.

Digital reverb implementation take digitally recorded sound and use simple mathematical operations to create repetitions in the digital signal to mimic the reflections of the natural reverberation. The power of digital reverbs, in comparison with the reverb units above, comes from the ability of the user to control the reverb characteristics. The typical characteristics and controls of the artificial digital reverb are similar to the ones of the natural reverberation – coloration, length, etc. They may be named differently. Rather than absorption, we may see the wet / dry mix. Rather than coloration, we may see equalization, or a high pass cutoff. Rather than total length, we may see room dimension. Rather than irregularity, we may see left / right perception.

If the number of reflections in the natural reverberation is in the billions for a second of reverberated sound, then we cannot really model the natural reverberation. We can, however, create artificial reverb with fewer repetitions, but with the same characteristics as above. We will model early reflections separately from the late reverb. We will add multiple repetitions that decay due to absorption in some total amount of time in a way that creates diffusion and some irregularity.

Here x(k) is the digital input signal at sample k, y(k) is the output signal at sample k, M1 though MN are various delays in the signal in number of samples (N different delays in number) and g1 through gN are various gains applied to the delayed signal (usually g < 1 to signify that the repeated signal is of smaller amplitude and there is decay). In this formula, the output y(k) as the sum of the original input signal x(k) and N repetitions of the input signal with various delays M and decays g. In effect, a tapped delay line is very similar to an echo or a feedback comb filter, but it may be very different, as here there is no relationship between the gains gn or the delays Mn and there is only a finite number of repetitions N.

Late reverb: A typical implementation of the late artificial reverb is a collection of sequential all pass followed by parallel comb filters. This collection is called the Shroeder reverb.

In the Shroeder reverb, all pass filters create multiple successive repetitions of the original signal with decaying amplitude and use very short delays. These filters simulate the diffusion of the natural reverberation. The feedforward comb filters in the Shroeder reverb have longer delays and have two purposes. First, they provide some coloration through the characteristic comb filter magnitude response (see Comb filter). Second, they introduce irregularities in the reverb – peaks in the delays (see Shroeder reverb).

An alternative to the Shroeder reverb is to use several Shroeder-Moorer low pass feedback comb filters in parallel, followed by sequential all pass filters.

Unnatural properties of the artificial reverb

A reverb with gated time, rather than disallowing the reverb based on an amplitude threshold, would cut it off based on the amount of decay time. For example, we may want a reverb that stops 250 ms after it starts, independently of whether the reverberations quieted down or not. This type of digital reverb is rare, but can be imitated by first compressing the original sound to make its dynamics more even, and then applying a reverb with a gated decay threshold.

There are no strict guidelines on using reverbs in music recording and this is generally a matter of taste. Pronounced and long (over a second) reverbs were very prominent in the 1970s. Short and less obvious reverbs were used in rock music in the 1990s. Tastes will continue to change.

The following are a few notes that may help.