A track in Orinj is a collection of wave, loop, and MIDI files with similar mix parameters. That is, all wave files, MIDI files, and loop files in a track in the multitrack session have the same effects, added amplitude, and so on.

For the most part, when working with a track in the multitrack session view in Orinj, you will use the track control panel to the left of the track. A picture of this panel is shown here.

You can use it to rename tracks, adjust the volume and pan of tracks, select input devices for recording, and so on. An alternative way to control tracks is to use the multitrack session menu. Click on Track in the menu to see the available commands.

To mute a track, click on the mute button (

If you want to mute individual waves rather than the whole track, see Orinj Working with session blocks.

To solo a track, click on the solo button (

Change the volume of tracks

Use the dialog to adjust the volume and close it when you are done.

Change the pan of tracks

To change the pan of a track, use the pan control (

Use the dialog to adjust the pan and close it when you are done.

Change the input device of tracks

) in the track control panel to the left of the track or click on Track and then on Input Device in the Orin j menu. You will see the following dialog. 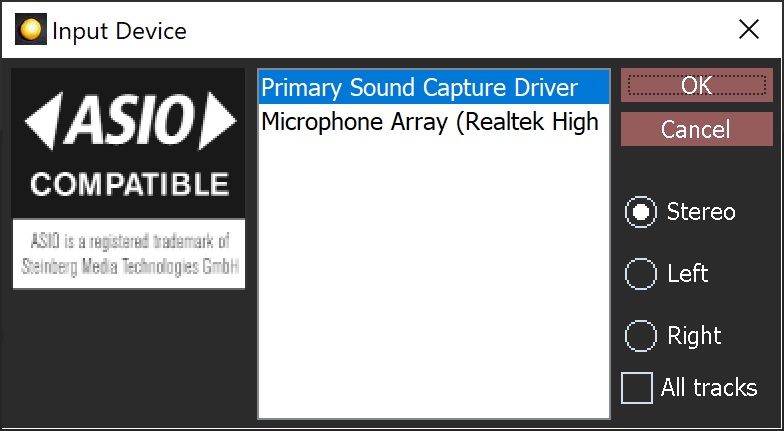 All available input devices (soundcards) will be listed in this dialog. Choose the device from which you want the track to obtain recorded data and click OK (see also Orinj Track control panel in the multitrack session).

To prepare a track for recording, click on the record button (

To make a track a premixed track, click on Track and then on Pre Mix in the menu. To remove premixing, click on the same menu command.

A premixed track is mixed into a single wave file every time it changes (e.g., when adding blocks, moving blocks, or adding effects). This file is temporary. It is usually stored next to your session and will be deleted when exiting or when you start a new session.

The premixing of tracks that are selected for premixing happens in the background. It is automatic and starts every time the track or its effects change. You will not know that Orinj is preparing the track, unless you play the session while this preparation is still going on. In that case, you will get a message that tracks are being premixed and playback will wait until the premixing is complete.

Premixed tracks help by reducing the amount of computations that Orinj does when playing and recording. However, during playback, you cannot change premixed tracks, other than to mute and solo them and to change their volume or pan. You should choose tracks for premixing that are mostly complete in terms of production. Also, you should only choose tracks for premixing when you need more computational power, such as when playback skips (see Orinj CPU status bar).

There are several controls that will be unavailable for premixed tracks during playback. These include effects, dry and wet mix, dry and wet mix envelopes, and adding, moving or removing of blocks. These same controls are available when there is no playback. 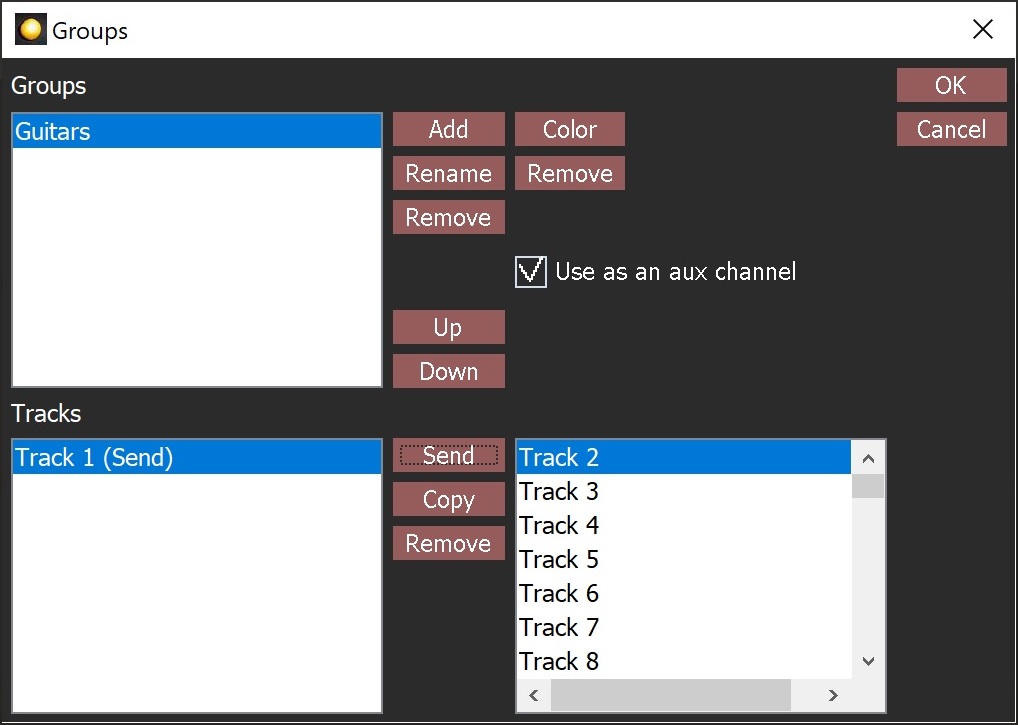 Existing groups are listed in the top left.

Groups are simply a way to mark tracks and order tracks. They do not affect the sound mix. If a group has a color, the color will show up in the session, in the track control panel to the left of each track that belongs in the group. To order all tracks according to the groups, click on Track, then on Groups / Aux Channels, and then on Order in the Orinj menu.

Click on OK in the Groups dialog when you are done.

To change the amplitude, pan, and effects of an auxiliary channel, click on Track, then on Groups / Aux Channels, and then on Aux Channel Controls in the menu. You will see the following dialog.

You can select the aux channel on the left and use the controls on the right.