Orinj effects use a strict programming framework that allows Orinj to operate with or without the effects and allows new effects to be developed and added to Orinj without modifying Orinj itself. This means that external developers can prepare their own Orinj packages with effects in addition to the effects that are included in the Orinj installation. All effects can be installed or updated separately, without modifying Orinj or its installation.

Effects in the Orinj installation

To see all digital signal processing effects in Orinj, click on the Effect menu in the multitrack view or the single wave. Orinj effects are organized in six groups: delay, reverb, dynamics (e.g., compressors), equalization, filtering (e.g., a high pass filter), and other (e.g., a dither). Scroll through the menus under the main Effect menu to see all effects.

To add an effect to a track in the session or a wave in the single wave view, click on the corresponding menu. For example, to add the Orinj Delay, click on Effect, then Delay, and then Orinj Delay.

Whenever you add an effect, you will see a dialog with parameters specific to that effect. The following example is the dialog for the Orinj Delay. 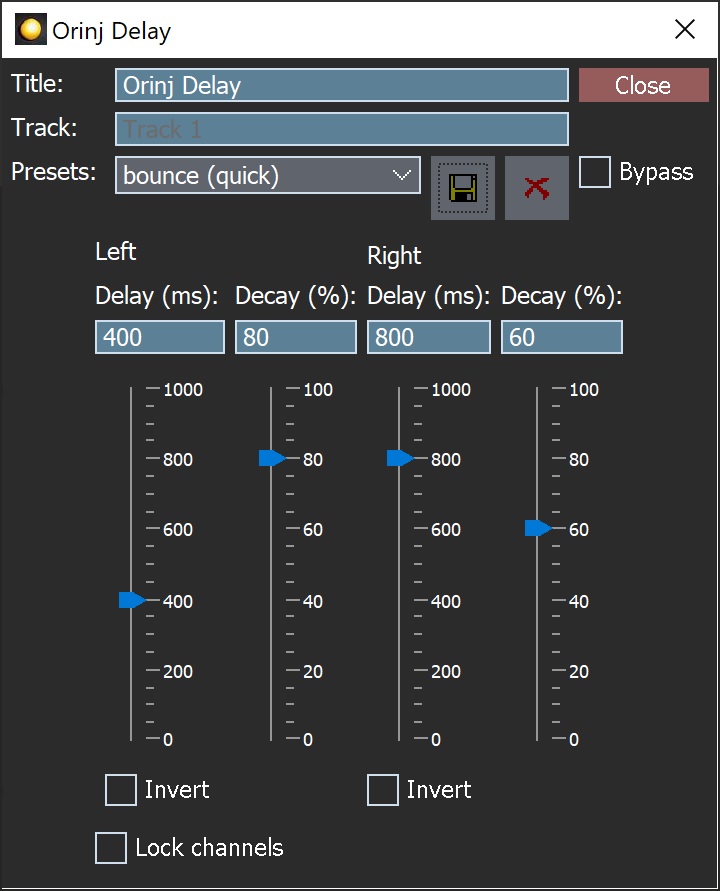 Although each effect has its own specific parameters and corresponding controls, some parameters are the same for all effects.

Many Orinj controls use a box and a slider at the same time for the same value. For example, both the box and slider for the left channel delay in the example dialog above control the left channel delay amount – the difference in time between the original signal and the delayed signal in the left channel. As you change the value of one of these controls, the other one will change automatically. The slider is usually easier to use, but the box allows you to specify more precise values. Use the one with which you feel most comfortable.

Effects on mono and stereo waves

Effect dialogs, such as the delay dialog above, are non-modal – they do not have an OK or Cancel button and do not require you to do anything before returning to Orinj. You can use the rest of Orinj while the dialog is opened. This also means that the values of the actual effect will change at the moment you change the controls in the dialog, whether or not you close the dialog. You can also keep the dialog open and adjust controls during audio playback to get a better idea of how the effect will sound. The output signal of all Orinj effects is recomputed during playback (and not before) and so the effect that you hear will change as you change the controls.

Since effects take a lot of computing power, you have the option of premixing some of the tracks (see Orinj Working with session tracks). When a track is premixed, it is mixed into a single wave file before playback. All effects are applied. You can choose to premix a track to reduce the computations done during playback. You should do so for tracks that are approximately complete in terms of production and, usually, only when you need more computational power. You cannot change the effects of a premixed track during playback. You can still change these effects when there is no playback (in which case the track will automatically be mixed again).

Every effect is equipped with a start and an end time and the effect works only between the start and end time. By default, the effect starts at the beginning of the session (or loop), at time 00:00:000 and ends at the end of the session, wave, or loop. You can change that in sessions and in waves. There are two ways to do so.

Alternatively, add the effect and click on Effect and then on Times. You will get the following dialog.

Set the beginning and end time of the effect and click OK when you are done. If you want the effect to end at the end of the session, check the end of file/session check box.

Crossfading happens over 5 milliseconds. In the current version of Orinj, this cannot be changed by the user. This is short enough to not be noticeable, but it is always best to start and end effects where the amplitude of the signal is low (e.g., between syllables in a vocal recording), especially since many effects must introduce some (very short) delay in the processed signal.

While effects distributed with Orinj crossfade, there is no guarantee that effects developed by others with the Orinj effect framework will do so.

Some effects are designed to introduce large delays in the signal. The Orinj Echo is an obvious example. If you apply this echo to a wave between 1 second into the wave and 2 seconds into the wave, you will hear the echo of the signal between 1 and 2 seconds into the wave. The echo itself may start after 1 second (i.e., if the echo delay is 0.5 seconds, the first echo repetition will be at 1.5 seconds) and may continue after 2 seconds (i.e., until the last decayed repetition of the signal at 2 seconds). This is the design of all Orinj delay effects.

In the single wave view, effects can be applied to both channels or to each channel separately (even on mono waves, as Orinj sends the mono data separately to each channel). Some reverbs, for example, may send left channel data to the right channel and some right channel data to the left channel, to create better perception of space. In a mixed song, where instruments are panned left or right, much of the panning may be lost because of the reverb. In this case, you can apply the reverb separately to the left and right channels to preserve the panning.

To select the channel, to which the current effect should apply, click on Effect and then on Channel in the single wave view menu. You will see the following dialog.

When an effect is added, both its dry mix and wet mix are initially set to 100%. This means that the original signal (the dry signal) will be present with full amplitude. In some effects, such as the Orinj Distortion, you must lower the dry mix to make the wet signal more audible.

To change the dry mix, click on Effect and then on Dry Mix. You will get the Dry Mix dialog shown in the picture below.

Click on Effect and then on Wet Mix to change the wet mix of the current effect in the current track. You will get the Wet Mix dialog shown in the picture below.

Adjust the dry mix or wet mix of the effect and close the dialog when you are done. The dialog is centered on the track to which it applies.

) and the overall dry and wet mix controls in the track control panel will be enabled. Otherwise those controls will become disabled (grayed out).

) in the track control panel to the left of the track or click on Effect and then on Show Wet Mix Envelopes.

To delete envelope points select the track over the points that you wish to delete and click on Track and then on Delete Envelope Points.

You can save all effects in a session track, a wave in the single wave view, or a loop track in a separate file. This file can then be imported into another track or wave. This is the easiest way to copy effects from one track to another or from one wave to another. The effects will be added to the new track in the same order and with the same parameters.

To export or import effect stacks from the main session channel, click on Track and then on Master Channel in the menu. In the master channel dialog, use the Export and Import buttons.