A phaser is a sound effect similar to a short delay or a chorus, but with distinct wah wah qualities. The effect is achieved by combining the output of a sequence of all pass filters with the original signal. The filters change in the phase of frequencies in the signal and thus reduce the magnitude of selected frequencies. The filters also vary the frequencies for which these magnitude reductions occur and this variation is similar to a wah wah.

See Orinj Phaser to hear a sound sample before and after a phaser.

A phaser may also use a single control to modify a number of these parameters together, based on the preference of the designer.

An example continuous all pass filter for a phaser

The following is the transfer function of a continuous time all pass filter that can be used in a phaser.

This is a first order all pass filter.

This is indeed an all pass filter, as its magnitude response is

The phase response of this filter is 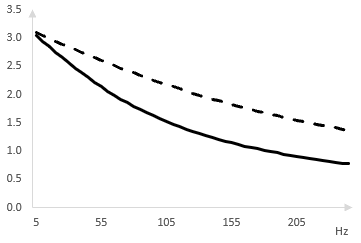 An example discrete all pass filter

Use the bilinear transformation to create a discrete digital all pass filter from the continuous filter above.

This filter computes its output y at sample k from the input x as follows.

d is a constant that multiplies the current sample of the input x and so we can call it the decay of the filter. (This is essentially is a special case of the Shroeder all pass filter described in the topic All pass filter).

The following is the magnitude response of a phaser with only one first order all pass filter. As expected, combining the original signal with the output of a single all pass filter simply works like a high pass filter. In this example, we set ω0 = 50 Hz (the sampling rate is 500 Hz). 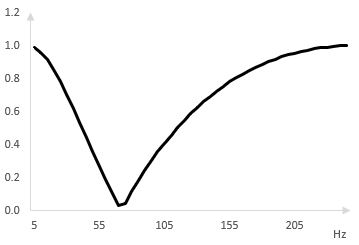 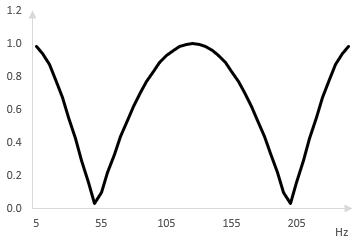 Oscillation in the phaser 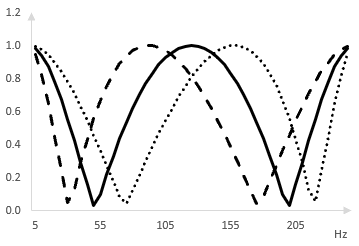