The Orinj Dither is an effect that introduces low level random noise to the signal to reduce systematic errors – a process known as dithering. Such systematic errors could appear, for example, during the recording quantization when an analog signal is converted into a digital signal. The values of the digital signal are the rounded values of the analog signal, especially when the sampling resolution is lower. If the analog signal is periodic, the same analog values will often be rounded in the same way and the resulting error will be correlated with the signal. Errors due to rounding cannot be removed but can be made random and not systematic.

The Orinj Dither can be added to tracks, auxiliary channels, and the master channel in the multitrack session view and to waves in the single wave view. 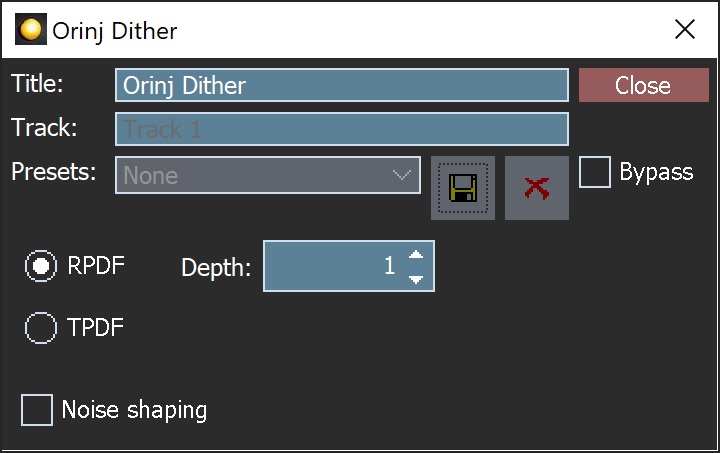 When this dialog becomes visible, the Orinj Dither effect has been added. Adjust the parameters of the dither, which are described below, in the dialog above and click Close.

See Orinj Effects for an explanation of the Title, Track, Presets, and Bypass controls. The remaining Orinj Dither controls are described below: