The following is a tutorial for those not familiar with Orinj. If you have already used Orinj or similar software, you do not need this tutorial.

This tutorial will help you record a simple song. You will play the guitar, sing the vocals, and use Orinj to create drum and bass tracks.

The tutorial is organized in five parts.

Explanation: Orinj does not require a special installation. Everything needed to run it is in the zipped file available on this site.

Orinj requires Java to run. Java can be downloaded an installed separately.

Running Orinj may require changing some of the permissions of orinj.jar.

Set up a folder for temporary sound files

Explanation: Sound files, such as wave files, use a lot of data and are stored on your hard drive and not in the computer memory. Orinj uses temporary wave files for various purposes. For example, if you change a wave file, Orinj will create a copy of the file and keep the original, so you can undo the change.

The folder that you specify here is where Orinj will place temporary files.

If you do not specify a folder, Orinj will use the user folder for your operating system.

Temporary files are temporary. They will be deleted when Orinj exits.

Not all temporary files are stored in this temporary folder. Most, in fact, are stored next to the original file or next to your session.

Orinj will remember the temporary folder settings next time it starts.

Explanation: The size of the buffer is the amount of data that Orinj reads from the hard drive, writes to the hard drive, sends for playback, or receives from recording at one time.

With larger buffers, there are fewer attempts to access the hard drive or the soundcard, which makes Orinj faster when working with audio data. However, larger buffers would also make Orinj respond more slowly to your commands. For example, when you stop playback, you may have to wait for the current buffer to be processed, before playback stops.

You cannot know immediately what buffer sizes are appropriate. The sizes shown here may not be the best for your setup.

As you record and play, choose a size that is small enough so that Orinj is responsive to your commands, but not too small to cause problems when Orinj is processing audio (e.g., when playback skips).

Orinj will remember the buffer settings next time it starts.

There is no direct monitoring in Orinj. That is, the signal that comes into Orinj for recording is not played back through Orinj (it might be played back by the recording device or soundcard, but that is independent of Orinj). Since Orinj does not use direct monitoring, there is no need for its buffers to be very small. You could use very small buffers (e.g., 1 ms), but you can also use buffers that are much larger (e.g., over 50 ms) without noticing any changes to performance.

Check the latency of your recording device

If your devices or system do not allow ASIO: 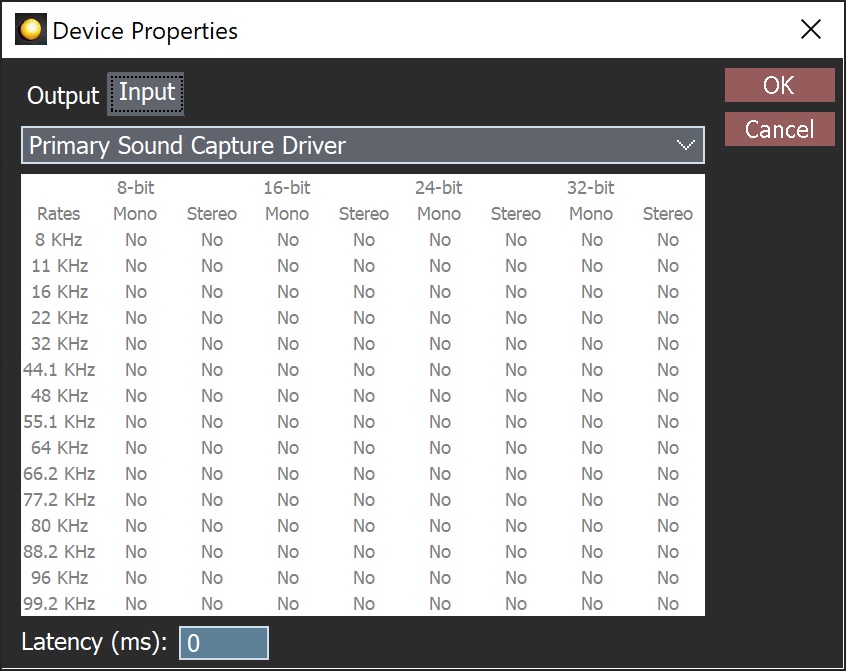 At this point, you cannot adjust for the delay (the latency), as you do not know what the latency is. Follow the steps in this tutorial to record a song. After learning how to record, the steps to find the delay are simple.

The latency will be different on different sound cards and operating systems. Some will not introduce a delay.

Orinj will remember the new latency next time it starts.

You can always ignore the latency and move the recorded piece to the correct position after the recording. Zooming in helps in being more precise.

Explanation: A DLS or an SF2 file helps Orinj convert MIDI files to wave files. It contains sound samples and explanations about how these samples should be used when MIDI instruments and notes are played.

MIDI files in the MIDI roll view are treated as MIDI files. MIDI files inserted in the session, in the multitrack view, are converted to wave files. This helps when adding effects and synchronizing wave and MIDI playback. The conversion of MIDI to wave requires a DLS or SF2 file.

There are other ways to convert MIDI files to wave files without a DLS or an SF2 file. You can simply play the MIDI file and record it. This is described in Part 3 of this tutorial.

This completes the first part of the Orinj tutorial – setting up basic Orinj preferences. The remaining parts of this tutorial are as follows.