You can now use SF2 and DLS sound fonts to build loops.

Loops now can contain more than just drums. They can include any instruments – piano, brass, bass, guitar, and more. You can pull from more than one sound font, if, for example, the brass in one is better, but the piano not so much. Since there are many free (and paid) sound fonts out there, this is a significant improvement to Orinj.

To load sound fonts, click on Preferences and then Sound Fonts in the menu. 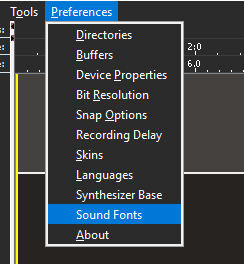 Load the sound fonts that you want in the dialog that pops up. 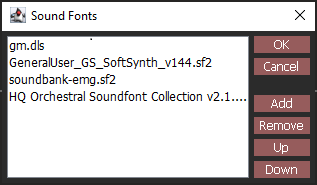 Click OK and these sound fonts will also be loaded in the loop tree. 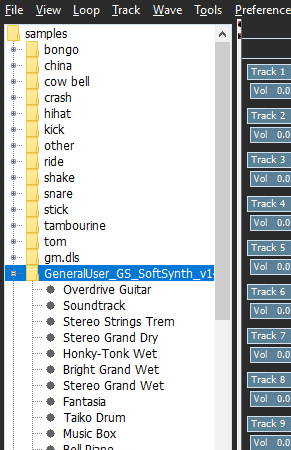 Pull instruments from the tree into the loop tracks and add hits as you wish.

To group tracks in the session, click on Track and then on Groups / Aux Channels in the menu. Add and name groups and channels. 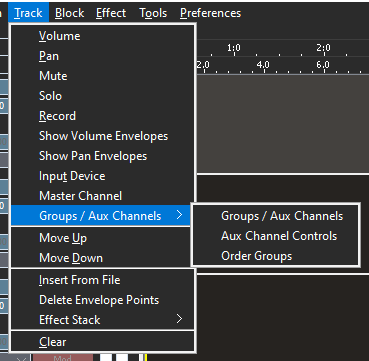 Groups are simply used to organize tracks (i.e., to sort the tracks).

The master channel has similar controls. These are applied to the overall mix, after tracks and auxiliary channel controls and after the track are mixed for the output.

MIDI files in the session

MIDI files are now converted to wave files when inserted in the session. This is good, as it improves the synchronization of MIDI and wave playback and as you can now apply the same effects to MIDI files as to wave files.

This means that you must have at least one DLS or SF2 file available, so that MIDI files can be converted to waves. The good thing is, free DLS and SF2 files are available. Click on Preferences and then Synthesizer Base to specify the one that will be used.

The installation remains the same. Orinj is fully a cross platform application and does not require installation (incidentally, the next major version 7 probably will, as we are working to incorporate VST plugins). You can simply extract the downloaded zip file and click on orinj.jar to start it (with some permission changes on MacOS and Linux and similar systems).

As always, a version 6 license will work on all version of Orinj up to and including version 6. A version 5 license will not work on Orinj version 6 and above. As before, there isn't that much functionality that requires a license.

The loop building view is now condensed to show more of the tracks and hits. The same view was simplified to remove effects, but now allows you to change note pitch and note length (for DLS and SF2 samples).

Java 7 is no longer supported. While we can make Orinj work with Java 7, there have been quite a view major upgrades to Java since version 7 and it is time to move on. For those who are apprehensive about using Oracle's Java installation under Oracle's new license, OpenJDK is free and does not require an installation.